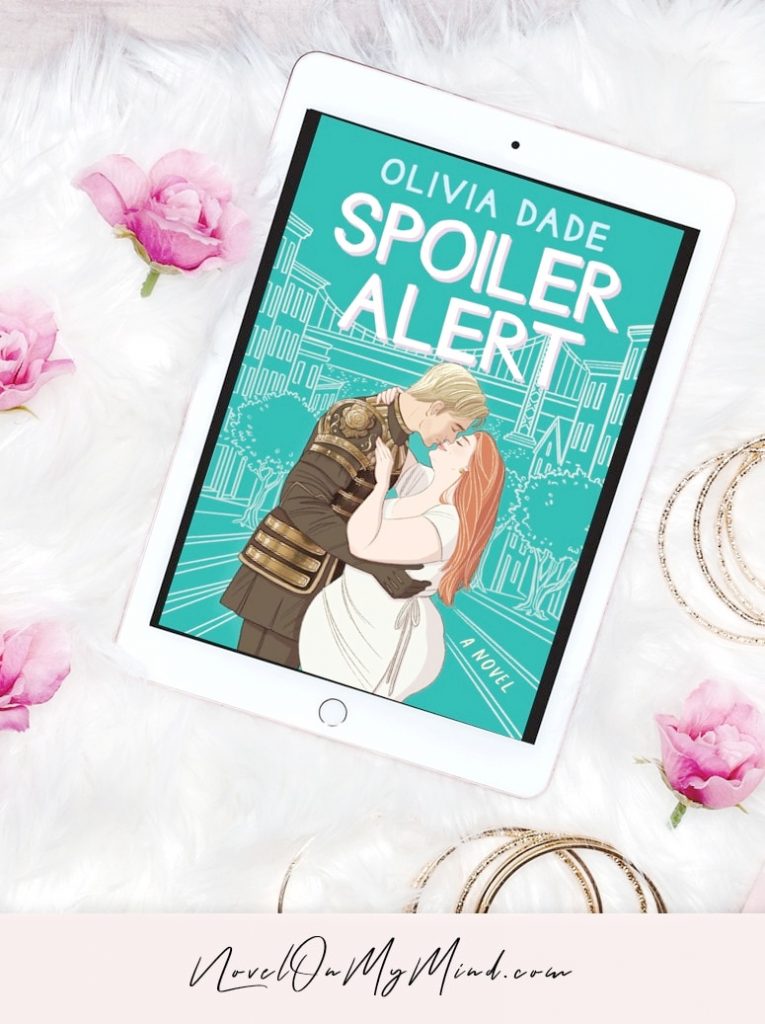 A match made in fandom, said the tagline. And then, such a cute cover, a few people recommending it to me and just the fact that February is such a perfect time for contemporary romances…

These are just some of the reasons why I decided to pick up Spoiler Alert by Olivia Dade.

To be honest, I’ve never really been into fanfiction (I’ve given it a try, but it really didn’t do anything for me). And yet, for some reason, when I heard that fanfiction is kind of a huge part of the plot, I got instantly interested.

I also heard that there was some case of mistaken identity/secret pen pals going on in this book. And I love that trope.

Plus, I read the blurb and as soon as I realized that the heroine is plus size and that both of them are in their late thirties – well, at least I could hope this story would end up being more original than most contemporary romances.

So, as the February 14th was quickly approaching and I had Spoiler Alert on hand, this choice was really a no brainer. I was hoping for something fun, easy, sweet and fluffy, and maybe with one or two meaningful moments.

I did have a few more potentially cute and fun romances that I was debating between. But Spoiler Alert seemed closest to my reading mood at the time. 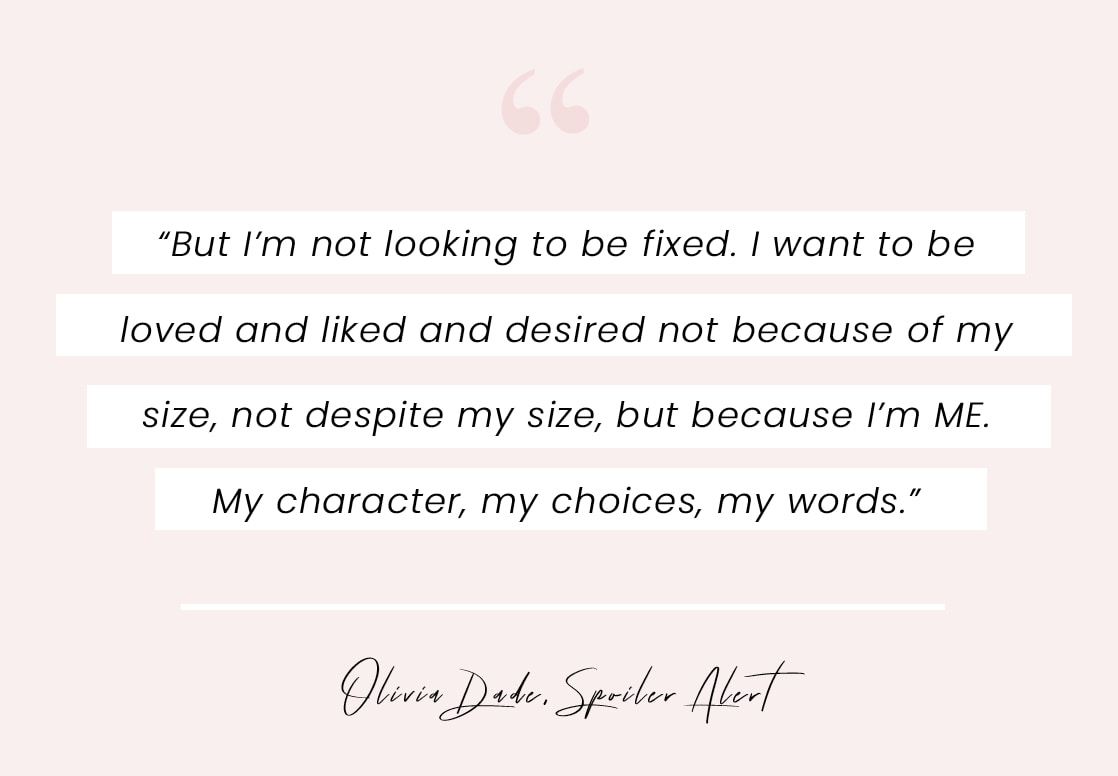 April Whittier is done hiding her love for writing fanfiction. With one photo of her in a costume of her favorite fictional character, she is revealing to her colleagues exactly what she likes to do most in her free time.

She is also revealing to the other fanfic writers on the Lavineas server that she is plus size. And even though she loves her body as it is, she worries about the reaction of her closest fandom friend Book!AeneasWouldNever. They have an undeniable chemistry online, but what will he think about the way she looks?

Marcus Caster-Rupp is an actor playing in one of the most popular fantasy TV series Gods of the Gates (read: Game of Thrones). He loves acting, but the way his character’s arc gets butchered by the producers – not so much.

To ease his frustration and express his true opinion, he writes fanfiction under the name Book!AeneasWouldNever. But if anyone ever finds out it is actually him behind those lines, his whole career would be in danger.

One day, he gets tagged in a tweet in which a girl gets fat shamed and laughed at for her love of a character on Gods of the Gates. To show his stand on the matter, Marcus publicly invites the girl out on a date.

Uh, I had so many problems with this book. And let me tell you – I do not like writing negative (or mostly negative) reviews. But I am always trying to make my reviews as helpful as possible to you guys.

Of course, just because I didn’t like a book doesn’t mean you wouldn’t like it either. So take my opinions with a grain of salt, because that’s exactly what they are – just my opinions.

However, if some of the down mentioned things sound like something that might end up annoying you as much as it annoyed me… Well, judge for yourselves.

Spoiler Alert by Olivia Dade – I am actually very disappointed I didn’t like this book. It sounded like exactly the kind of story I would enjoy very much. So much so that it was the book I was looking forward to the most for this year’s pre-Valentine’s Day reading.

There were a few good things about this book, so let’s start with those. I actually really loved this idea of these two characters, each dealing with different challenges, coming together and accepting each other for who they really were.

They had a few very sweet moments.

I loved how passionate they were about their fanfiction writing. It clearly meant a lot to them and it was a huge part of the story, their lives and their relationship. They had different motives for entering that world. And those were pretty good motives.

Even though I’ve never read or written fanfic myself, I have other things in my life that I love as much as they loved writing about their favorite book/TV series. So that part of their characters was very relatable.

There were also parts of April’s character I really appreciated. I loved how confident she was. And the fact that she was still just a human being and had her own insecurities made the whole thing even more relatable.

I didn’t really have problems with the premise of this book or with any of the ideas. But it was just so poorly executed, it kept pulling me out of the story.

The writing wasn’t the best. It was full of over explaining, stating the obvious, repetition, small inconsistencies… The whole thing felt very unconvincing and it had nothing to do with the not-likely-to-happen-in-real-life plot line.

The characters were not quite two dimensional but also not fully fleshed. Their relationship, the attraction, the “building tension” if you can call it that – it was all a hot mess. More mess than hot.

That moment on their first date when they started to realize they are attracted to each other – man, that part was bad. They had zero chemistry. And the things that sparked the attraction and their reactions to them – it was all just ridiculous.

The dialogs were… not good.

The author did that thing where some of the dialogs might be exactly what you could hear in real life, but they weren’t ‘book-real’. Not progressing the plot. Not telling more about the characters. They weren’t even particularly interesting or funny. They were there only to stretch the word count.

And then, even the protagonists’ background stories… I was hoping that learning more about their families, their past and everything they had to deal with might shed some light on a few things. And it kind of did. But…

Their parents were completely two-dimensional. None of that had any real depth and didn’t feel real. (Better say – it was not described in a way to show any depth.)

Everything was put there with a purpose – to prove a point. To showcase all the overwhelming challenges our protagonists had to deal with. It was all just a tool to get the story where the author wanted it to go, and it was very noticeable and felt artificial.

Everything was a bit too exaggerated to be convincing. I think some subtlety might have helped and would probably convey the message in a better way. Because everything was way overemphasized, nothing seemed genuine.

I also just have to mention – this book gets quite steamy. Which I know some people love while others try to avoid at all costs. So, you know – do with that what you want.

Conclusion – great idea for the story, didn’t come out quite right.

The writing did get better in the second half. Not by much, but noticeably better. And maybe this isn’t fair, but by that point I just didn’t care anymore. I just wanted to get to the end and be done with this book.

Think I saw that there will be a sequel or a companion novel to Spoiler Alert. I will most definitely not be reading it. I may pick up something else by this author, sometime in the future and only if her future books get lots of great reviews.

For now, though, I think I’m done. 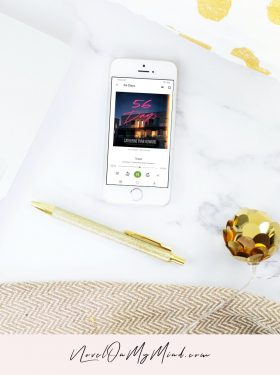 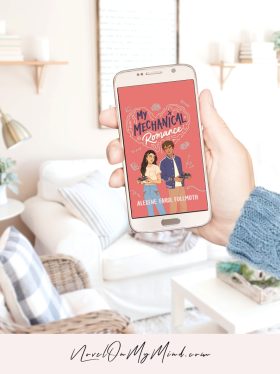